05 Feb Why I hate Weightloss Contests Part I

Why I hate weight loss contests

It’s New Year’s resolution time and lots of you want to lose a few extra pounds. It’s also the time we start seeing lots of 90 day challenge’s and weight loss contests. I asked my buddy Matt Terry, of Body Solutions,  what his thoughts were (as you can see below, he had a few so we’ll post in two parts).  Matt knows first hand the issues with weight struggles. Going from an obese child, to an Olympic athlete including a silver medal in the Pan American games in weightlifting, to college football to helping clients in the fitness world for over a decade.   Matt holds numerous certifications and is currently finishing his education in functional medicine.   He and his team help people with general weight loss, sports performance, fitness competition prep and functional nutrition coaching. 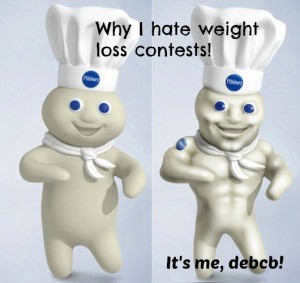 I hate weight loss contests.   Why?  Well I have many reasons, but first let’s go over some pros and cons.   There are very few good aspects to contests.  Mainly, they set a specific time frame and keep a person on track toward his or her goal and it generally gets someone motivated.  This is really where the pros stop.
Next, we will cover many of the cons, but first a little insight into how the fitness business works.
Before I owned my own studio, I ran big chain clubs, one the largest in the business.  And you know what drives those clubs?  Money. Clubs run weight loss contests to generate revenue.  I’m certainly not saying there aren’t people or clubs in the fitness business who run weight loss contests to help people, because there certainly are.  But the vast majority of the time, contests are simply money makers and lead generators. Think about it-usually the entrance fee is cheap,  they coincide with hot fitness times of year (New Years and right before summer) and the contests play on people’s emotions to get them involved.  You see ad copy similar to “are you  sick of NOT getting results like these?”  Does that motivate you?  Does it make you want to start?  After all, if that person did it, can’t you?  Contests are used as lead funnels for trainers or some kind of program.  Most people will try on their own, be unsuccessful, and hire a trainer.
Ugh. I had programs like that shoved down my throat by our fearless fitness leaders when I was a personal training manager.  I however, was one of those people that really wanted to help people so I didn’t mind.  That is until I started seeing trends of what people and trainers do to try to win in a weight loss contest.
Major cons with contests: