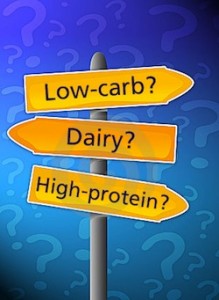 Over the next few weeks we will be laying out Paleo proteins, carbs and fat choices from the Paleo book and will explain a few modifications we make and why.  These modifications are based on an individual, his/her medical back ground and hormonal needs.
In our previous posts I have mentioned some items we use others do not and are actually not a pure paleo choice.  But as people learn more choices are beginning to change.  In fact very few people on earth, eat a pure paleo diet. Do you anyone know kills their own prey, eats and uses every part of the animal, drinks its blood (remember the phrase “blood thirsty savages” where do you think it came from?) So we all follow a modified paleo plan of some sort.
Some of our paleo modifications:
Even though sweet potatoes, quinoa and rice are not pure paleo foods we use them at times.  Why? Because they help with catecholamine production which is one of the gas pedals (the other is thyroid) for fatloss.  You can become catecholamine resistant and not be able to burn fat despite proper diet, exercise and recovery.  An easy way to tell if you have such resistance is when you are trying to sleep and your mind won’t stop racing.  Any easy fix for this?  Eat a few bites of one of the forbidden starches on paleo we mentioned, usually right before bed.  Overtime this will help correct the problem.  We use these starches as they are gluten free, low glycemic and most people like them with few having food allergies to those foods.  But again, they are not pure paleo, its modified paleo or what all nutritional plans we use have in common, a whole foods based diet.
Why not use fruits for catecholamine resistance?  Well fruits are often high glycemic, high in sugar but more importantly they are made of fructose. Which despite what you hear fructose from fruit is not processed the same way as high fructose corn syrup.  It is still sugar and should be used in moderation but the problem with fructose instead of being able to be used to help catecholamine resistance it actually goes mainly to refuel liver glycogen.  So not so much help with hormonal resistance.
Another reason we use these low glycemic starches and some low glycemic fruits is to help with insulin control.  We see over 200 clients a week in our studio and about 50% are purely nutrition / weightloss clients.   What do almost all of those clients have in common?  Insulin & blood glucose management issues.  These starches when used sparingly and at the right time (post workout) can help a person regain insulin sensitivity overtime speeding up fatloss, reversing type 2 diabetes and increasing recovery by restoring muscle glycogen vs a fruit source that only goes to liver glycogen.  The Paleo diet actually recommends dried fruit for people as a snack.  Someone with insulin issues (muffin top or diabetes) should avoid dried fruits like the plague as they are one of the most high glycemic foods a person could eat, immediately spiking blood glucose and insulin.  Which in most people who have insulin resistance issues will store that snack almost exclusively as fat because they lack the ability (thanks to insulin resistance) to partition those calories in muscle correctly, it almost exclusively goes to fat cells.  Hence why an over weight person generally does well on a low carb diet for a time, there is no glucose to misplace.
We also don’t let people have beer as obviously it contains gluten and hops (which increases estrogenic production in humans) the paleo diet does.  Diet sodas (in moderation) are also allowed if you actually read the book.  But again, we would never let a nutrition client sip on one of those.
So again the modifications we make will be based on someone’s individual health needs, digestive health and hormonal imbalances.
Next week we go through all paleo and modified paleo protein choices!