Here is a real life example of how food sensitivities can effect fatloss drastically from week to week.
This client has cut his bodyfat almost in half in 7 weeks of training and by next week will be in the 6% range. All this through the holidays, his birthday, almost 30% travel schedule and no cardio. Each week you will see large drops in bodyfat although scale weight has been steady.
Each week we have been adding more and more calories, more and more carbs and he has been getting leaner EXCEPT for last week.
We were experimenting with carb (starch choices) to add in. We ONLY added oatmeal in and his weight jumped by around 5 lbs in one week and his umbil went up. He said he felt bloated, heavy and sluggish.
This last week we simply removed oatmeal but added in sweet potato actually increasing his calories and carbs from the previous measure. The result? Back down 5 lbs, umbil lower than ever and feeling back to normal.
Moral of the story, learn what foods work for you and your chemistry. Just because a food is “healthy” does not mean its healthy for you. Its not about calories or cardio. This particular client is eating 40% more than he was originally and doing zero cardio. When he was training on his own prior he was eating less carbs and doing several cardio sessions weekly but bodyfat was much higher. Thats the power of dialing things in for your chemistry. 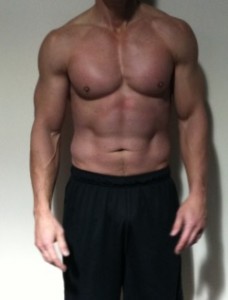