Why is  resistance training so important for fatloss?  There a several reasons but here are two very important ones.
a) Exercise increases glucose receptors without help of insulin, which makes you very insulin sensitive.  Eating starch and carbs pwo helps build muscle and will not be stored as fat because of the increased insulin sensitivity.  Eat carbs other times when not moving, all insulin goes towards fat storage.
b) Strength training helps preserve lean tissue.  When losing fat (not weight, but fat) your ultimate goal is to preserve AND build as much lean tissue as you can.  This results in a body composition change, not weight loss = a more toned, healthy and better looking body.  The person will be lighter but may not be as dramatic on the scale as you think..
Notice we didnt say cardio, we said weight training.  And notice we said fat loss, not weight loss.  You can lose alot of “weight”  via too much cardio, too little calories, and the wrong nutrient ratios  however your SHAPE will remain the same because most of your “weight” you lost was lean tissue.  Not good…
So say Mr. Jones starts out on his low calorie diet, tons of cardio and alittle weight training (basically the biggest loser show) and loses 100 pounds in whatever, 13 weeks.  Ever notice how his apple shape at 400 pounds still looks like an apple shape at 300 lbs?  He surely lost alot of weight, but sorry friends he lost no where near 100 lbs of fat, more like 50 to 60, hence his same shape at a lower weight.   And honestly who wants to work their ass off and starve themselves to be a smaller and technically since you lost lean tissue, fatter version of yourself?  Not it!
Now do it the right way, take a bit longer, focus more on the right food choices, lots of strength training and sprinkle in cardio as needed and you get a much different picture.  Promise you he wont be as “light” but his bodyfat will be much lower, he will look much better and he will be much healthier.
Proof is in the umm pudding..Take a look at the picture below most have seen who follow our page.  How much “weight” do you think Danny lost?  Most people think he lost 80 to 100 lbs.  Truth be told he only lost 50 lbs, and according to his measurements 48 lbs of it was fat.  It took him 6 months, his was a bit longer but he also never exercised which means his carb intake was much lower than it would of been if he exercised.  Which he is doing now, right Danny! 🙂
Bottom line, focus on fat loss vs weightloss, go “office space” on your scale, get your bodyfat measured and base your progress of how you look & your bodyfat measurements, and LIFT WEIGHTS! 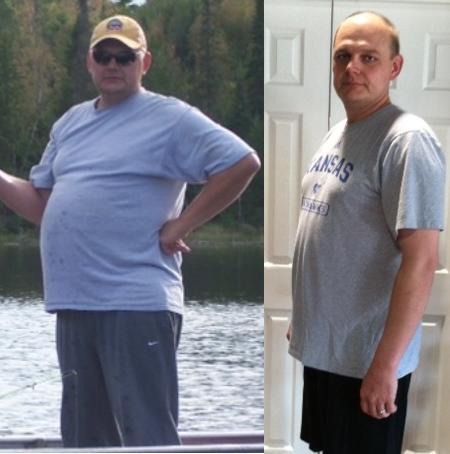